Hosenji Temple is located north of Midorigaoka Sports Park.
This temple was built by Nobutake, the founder of the Takeda family during the North-South Dynasty, and the protection of Mr. Takeda.
In the age of Shingen, it is one of the Kofu-Gozan. 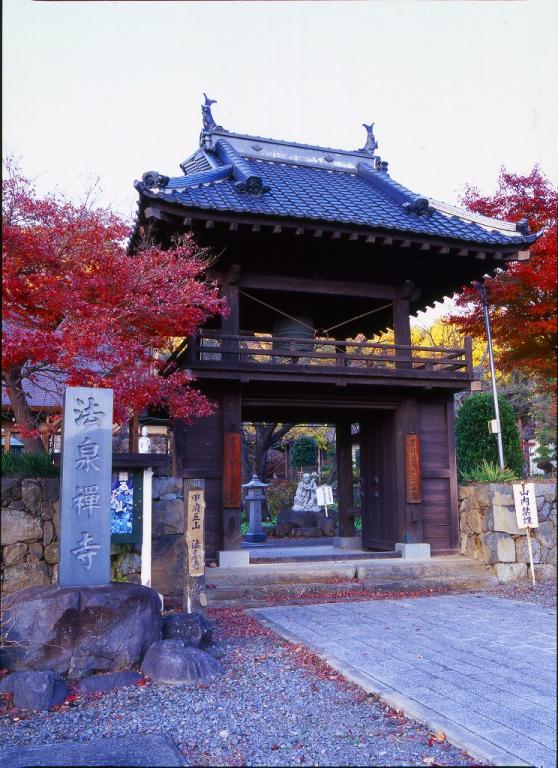 Kofu Gozan is a temple that is the center of religion within Takeda’s territory, but is also said to have served as a fort to protect Takeda.
In the precincts, there are many buildings from the Edo period, such as the main hall and the back of the storehouse. In the west, there is a tomb of Nobutake and a tooth mound of a tragedy warlord, Katsuyori, a successor to Shingen.
It is said that the tooth mound was buried in the precincts of Hosenji’s Kaitake Soetsu Kazuyo who attended Katsuyori’s funeral at Kyoto Myoshinji Temple and received some hair.

In March of 1930, the peasants of Shinshu Koike Village suddenly came to Shima no Yu (now Yamanashi Yumura Onsen) where he went for a hot spring cure.
Actually, residents of Koike Village had been mowing grass next to Mt. Uchida, but this time Masakazu Momoi, who controls Mt. Uchida, has set a ban.
Momoi recently banned the “free mowing of territory” for residents of Koike-village, who had acknowledged it as an established fact due to lack of hand from Katsuyori.

Did he try to take a mountain entry fee?
Koike-village took the case seriously and filed a lawsuit, requesting a decision in Fuchu.
But both sides remained parallel.
The peasants who came out of the village in desperate desperately pursued the victory during the holidays.
Instead of relying on the Takeda family’s magistrate, they would try to appeal directly to Katsuyori.
In the Edo era, it is illegal and subject to severe punishment if bad, but in the Warring States period, it is like a great boss of a farmer even though he is a lord.
There is no shyness.

Katsuyori Takeda “What? You guys!”
Koike-village’s people “Master, please cut grass at Mt. Uchida”
Katsuyori Takeda did not wear anything during the hot spring bath, and he knew what they were saying without knowing the situation.
It seems that this was just a year ago when the Takeda family was destroyed.

Also, Sanpachi Tada, which appears in the legend of Oni-no-yu, is one of the 24 commanders of Mitsuyori Tada.
Awaji Mamoru.
Serving Nobutora and Shingen, when he defended Shinshu Kokuzozan, he had a heroic legend that he had defeated a fire demon.
Perhaps it was a kind of robbery, but it was such a strong man that such a legend was born.