There is a hotel Koboyu next to Entakuji Temple. Behind it, Water mark of cane exists. 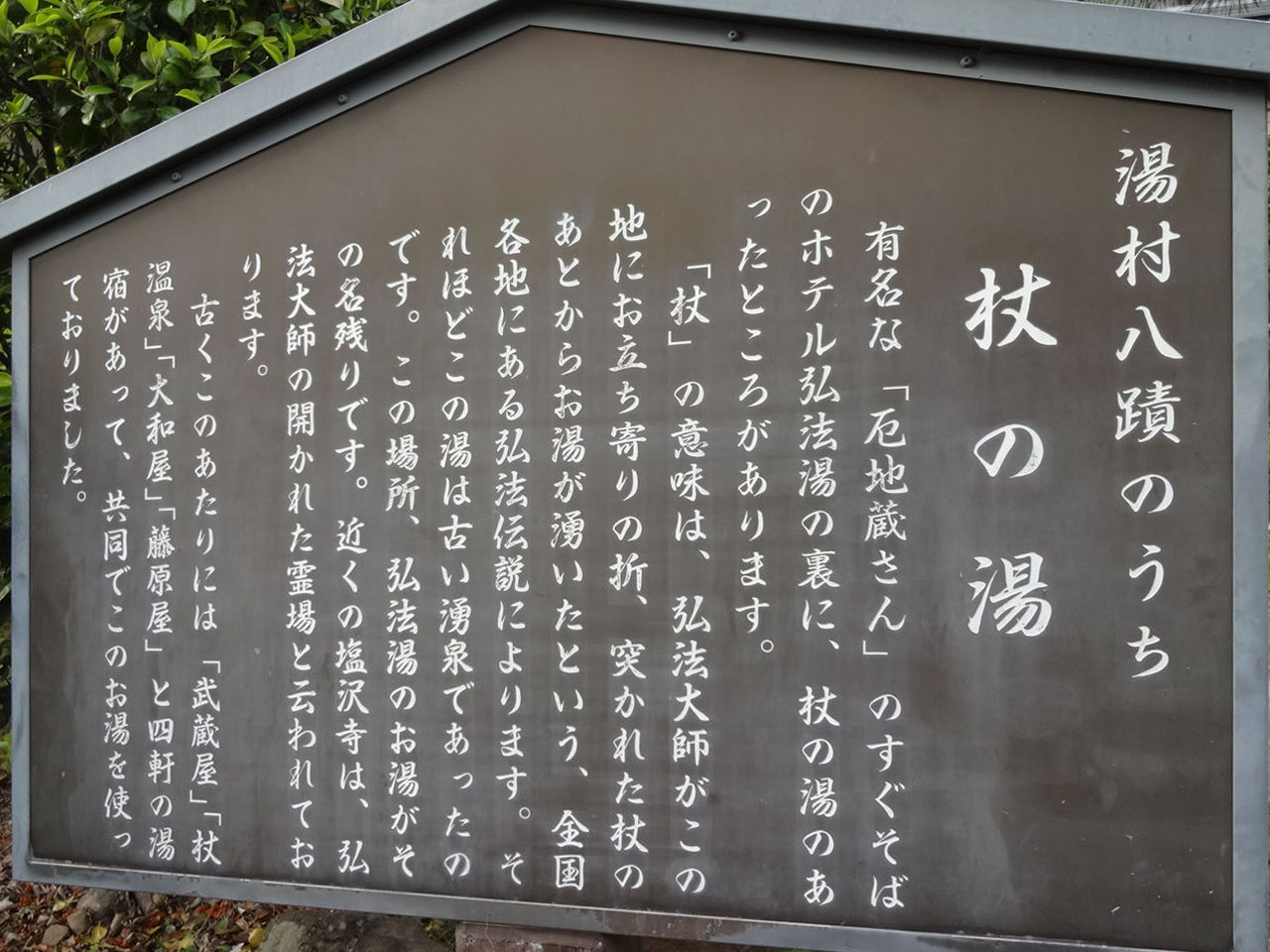 In 808, Kobo Daishi entered Koshu from Shinshu on the way back from the Tohoku cruise and stayed at a nearby eradication zone.
Huge stone was in the middle of the road, making it difficult for travelers to pass.
It is said that a hot spring grew out when the Daishi spelled the spell while holding the cane.

It is said to be “Tsue-no-yu” and “Kobo cane”, and it still remains today.
Before the ryokan area was established, the “Tsune-no-yu”, “Washi-no-yu”, “Tani-no-yu” and “Sanu-no-yu” were loved by the common people as public baths.
One of these three houses is drawn by Hokusai Katsushika.

“Tanino Yu” and “Mano Yu”
There was a hot spring called “Tani-no-Yu” between Yanagiya and Nak Yumura (former Fujinoya), which crossed the Enmeibashi bridge from the gate of Entakuji Temple.
It was a very rich and salty hot spring. That is why salt was taken on the banks of Yukawa, so it may have been named Entakuji.
Since salt was precious in the mountain country, as Echigo Uesugi Kenshin sent salt to Takeda Shingen, as the saying goes, “Send salt to the enemy,” there were times when we called Entakuji from Yumura to the present Shiosawa. And now Shiobe is a remnant of those days.

There is also a story that salt was separated at that time because it was called salt (shiobe) and later became salt, but its credibility is questionable.

When a Chinese high-rise master (Rankei Michitaka) was invited to Japan and stayed in Shinano (Nagano), he dreamed that it would be better to open it because a famous hot spring springs up in the country of Kai.
While entering Kai and staying at Entakuji Temple, He found smoke from the valley where the reeds grew, and when he mowed the reeds, the hot water was springing.
It is said to be in1347.

Because the hot water in this valley was plentiful, the people of Yumura dug a trench and dug next to Yukawa to flow to the village border.
However, this water entered a place where rice fields and fields were growing nearby, and had a bad effect on crops.
The angry villagers took the farming horses to block this ditch, and this time the fields of Yumura overflowed with hot water, which caused a conflict with the neighboring village.
When people were fighting, tired and sick horses made on the banks began to enter the pool of hot water in a pleasant way.
People stopped fighting and looked at this way.
After a while, the sick and tired horses got better, and then they started to call this hot water Mano-yu.

Much later than this story, when the current JR (former Japanese National Railways) opened the Chuo Line, I crushed rock from Yumurayama, which is a rocky mountain, to use as a track stone.
That is the ruins of the quarry today, but the stone cut out from here was being carried out by carriage at the time.
The horse pulling a carriage full of stones seems to have used this “Mano-yu”.

The Chuo Line was opened to Kofu in 1903 (Meiji 36). Until around 1955, the bath of Ma-no-Yu at this time entered a little from the road, and gradually became deeper from shallow water and then to shallow water. It seems that it was left like a pool.

According to the “Request for permission to open hot springs” submitted by Yumura Onsen to Shirou Pref. Fujimura in 1873, Hot springs of Yumura is effective for swelling and muscle pain in people and horses, flocking every day.

It is said that a large number of cows and horses came from 1 to 3 kilometers away for bathing, and it is considered that they were bathed for the purpose of refreshing cows and horses tired by farming and transportation.

This permission application was issued because a large number of cattle and horses were brought to the hot springs enough to hinder the passage of horses for agriculture, and the prefecture that knew this bathed in these hot springs Because it was stopped.