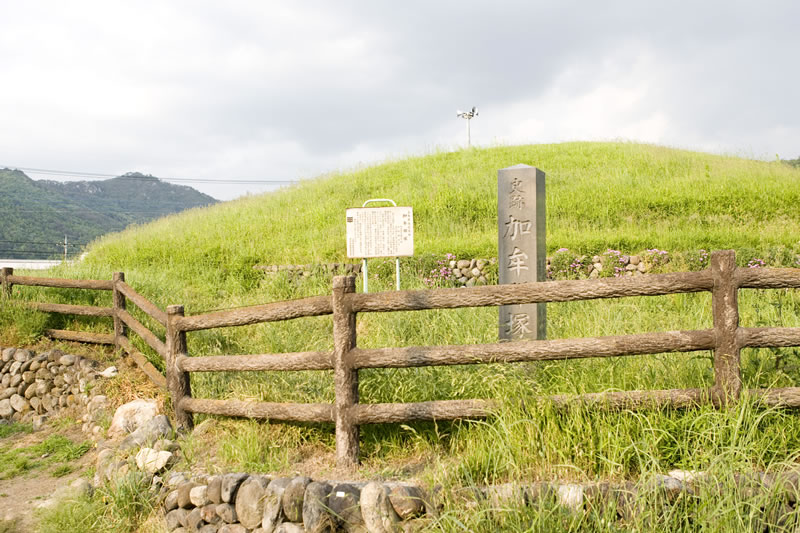 Heading northwest along the water supply route, you will find the Kannazuka-Kofun with many houses along the road.

It is also called Kanazuka or Kamazuka, and its size of about 7 meters in height and 40 meters in diameter is large in East Japan in the latter half of the 6th century and is designated as a prefecture cultural property.

If you look at the Minami Alps in front of Jizo-do at Entakuji Temple, you will see this Kamunazuka tomb heading out of a residential area.
The stone room is large enough for humans to walk in the side hole type stone room, and you can see inside from the entrance.
You will be amazed by the size of the stones that form the ceiling.

It is read as Kamuna.
Originally, Katakana (now Katakana) written by a visitor of Koguryo (now Korea) may have its etymology, and Kamuna is said to be the name of the God of Koguryo.

In any case, in the northern mountainous area of Kofu, there are a large number of stone tombs, such as Kannazuka and Manjumori Kofun, which extend to Yokone-cho, which is just before Isawa.
It is said that a foreigner who landed around Toyama came to Yamanashi and lived a lot here.

At that time, the current Korean Peninsula came to Japan at the time of the Warring States period, when it separated from Goguryeo, Baekje, and Silla, and these powers seemed to be competing in Yamanashi Prefecture.
And the name of Kai, the first generation of Kai Genji, who gave birth to Shingen Takeda, is Shinra Saburo, also known as Yoshimitsu Minamoto.

According to one theory, the name originated from the Silla Myojin of the Omi country, but it is possible that Shingen Takeda’s ancestor was a military commander from Silla.