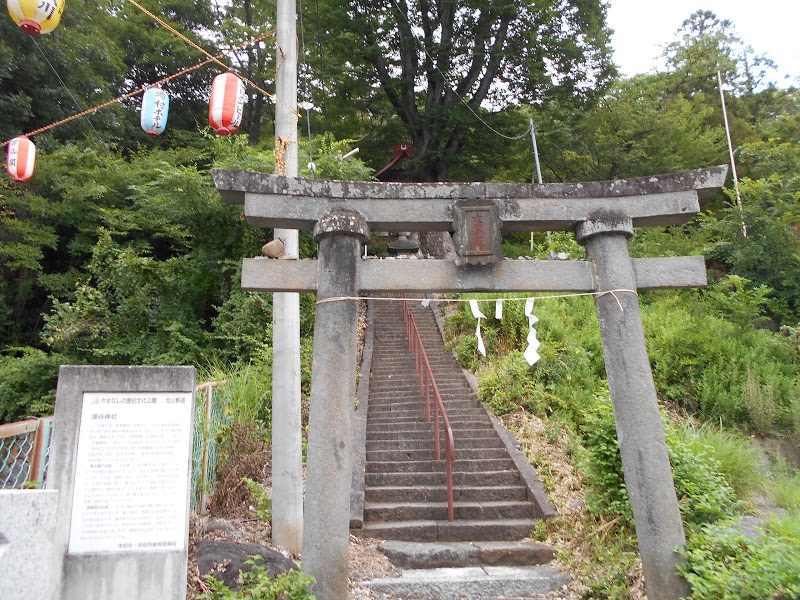 Yuya Shrine is located at the foot of the mountain south of the communal bath “Washi no Yu”.

This shrine is held as a festival god by combining Akiba Gongen, Omiya-san, and Yuya Daigongen, the guardian god of Yumura Onsen.
Yuya Gongen is also described in the 1601 in the sect book (Hirose Family Documents), indicating that it was an old shrine that had been worshiped before this time.

There are a lot of stone Torii gates, stone stairs, Koshinto, stone shrines, and large trees on the grounds.

The following legends of Yugongen remain.
“A long time ago, before the torii gate, there was a large cedar tree south of” Wash-no-yu “.
Every year from 12:00 on New Year’s Eve to 6:00 on New Year’s Day, there is a rule that people should not enter the bath because the hot spring god bathes.
At one point, there was a man who went into the bath saying there was such an idiot, and he died in a crucified tree of Osugi, the next morning.
After that, it seems that this rule was more strictly followed. ”
(From Kofu City Board of Education, “Kitayamano Michi”)

Approach route
In front of this precinct, the “Yumura furusato Festival” will be held by the Yumura Tourism Association on Saturday and Sunday, near the inn day on August 10.
From 1998, a jazz concert has been held using the precincts of Yuya Shrine, and it is crowded with many people.

In 2001, we planted a hydrangea tree, and in a few years it will decorate the shrine beautifully.