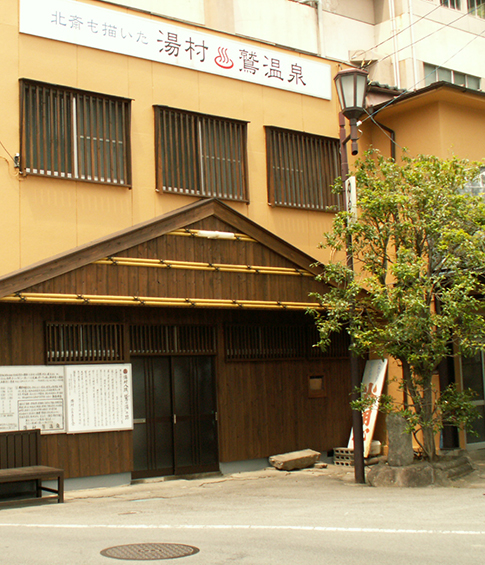 There is a communal bath “Washi no Yu” south of the Ryokan Meiji.
The name comes from the following legend of Yumura Onsenkyo.
It was open to the public as a public bath for the townspeople. (Not currently open)

Legends of Washino-yu and Oniyuno-Yu
Once upon a time, this area was a wilderness with rolling hills and swamps, and overgrown with kaya grass.
One day, an eagle flew out of nowhere, hid in Kaya grass a few times a day, and eventually flew away.
This lasted only seven days, after which the eagle no longer appeared.
People were wondering and looking around Kaya grass, there was a faint white steam rising, and when they dug up, hot water spewed out.
People were happy to set up a hot hut and when they took a bath, the temperature of the hot water was just and it turned out to be effective against various diseases.

The sick eagle was soaked in steam and was not fully relieved, so people were told that a hot spring would spring there. This eagle was supposed to be the incarnation of the god of the mountain, and they built a company and worshiped at “Yugongen”, and named the mountain Yumurayama. Yumura still has an old hot water named “washi-no-Yu”.

There was a samurai named Sanpachi Tada in Edo.
After hearing the reputation of Yumura Onsen, Sanpachi would like to take a bath at this hot spring once, soliciting his master for free time, and set off for Kofu all the way.

On the way, passing the foot of Mt.Tenmoku on a horse, there is a large tree on the roadside, a monster on the branch, and with a terrible voice, shouting, “Sanpachi !” the monster prolonged and grabbed the head of his name.
He was a brave warrior, so there was no fuss, and when he pulled out his sword and cut off the monster’s head, he cut off the wings of a big Tengu.
There, the monster screamed terribly, and escaped somehow.

Meanwhile, on a day when the rain and wind blew violently, one Great Priest came and stayed at the same inn as Sanhachi and entered the same bath.
Looking at the body of the practitioner, there was a very large scar on the back.
“Well, it’s a great scar, why did you get that injured?”
When the person next to him asked, the practitioner replied casually.
“This is a wound that I had played with a samurai named Sanpachi Tada a little while ago.

Sanpachi, who had heard this story from the corner of the bathtub from a while ago, pulled up a nearby sword and stood up, shouted, “Sanhachi Tada is here!”
The priest also jumped up, escaped from the bathroom, and fled to Yumurayama.
Sanpachi hurriedly followed him with his sword but finally lost sight of the monster.

The Tada family handed down the wings of this Tengu monster for generations and is said to still have it, and since then it has come to call this hot water “Oni-no-Yu”.
It is said that both “Washi-no-yu” and “Oni-no-yu” are old hot waters in Yumura hot water.

* The person named Sanpachi Tada of Edo, who appears in this section, is likely to be Takeda’s 24 general samurai, Sanpachi Tada (Mitsuyori).
It may have been changed by hearing and telling along the way.